Two to three inches of new snow has already fallen and it continues to flurry this morning.

If you are questioning classic vs skate today, choose classic today. New snow generally is a little more enjoyable on classic, for most people. (If you think otherwise, you are probably not asking the question.)

The most complete grooming starts in Jackson Village, at the Touring Center and extends out to Maple Mountain via Ellis South. We groomed “outside in” in this route, starting further out and grooming the Wentworth Loop last to have the freshest tracks for skiers who are just starting out, whether it’s on their first day or the start of a tour. The further you get from the Touring Center there will be more snow on the tracks and skate platform. The Prospect Farm trails will be groomed a little later (and this does include the Freeman Frost White Mountain Classic ski course, which will ski a little slower today, even after grooming.) Woodchuck is being groomed at 6:30 AM, ready to go by opening bell. The rest of the Upper Village will just be flat-packed (aka skate groomed) today. 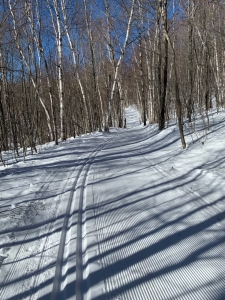